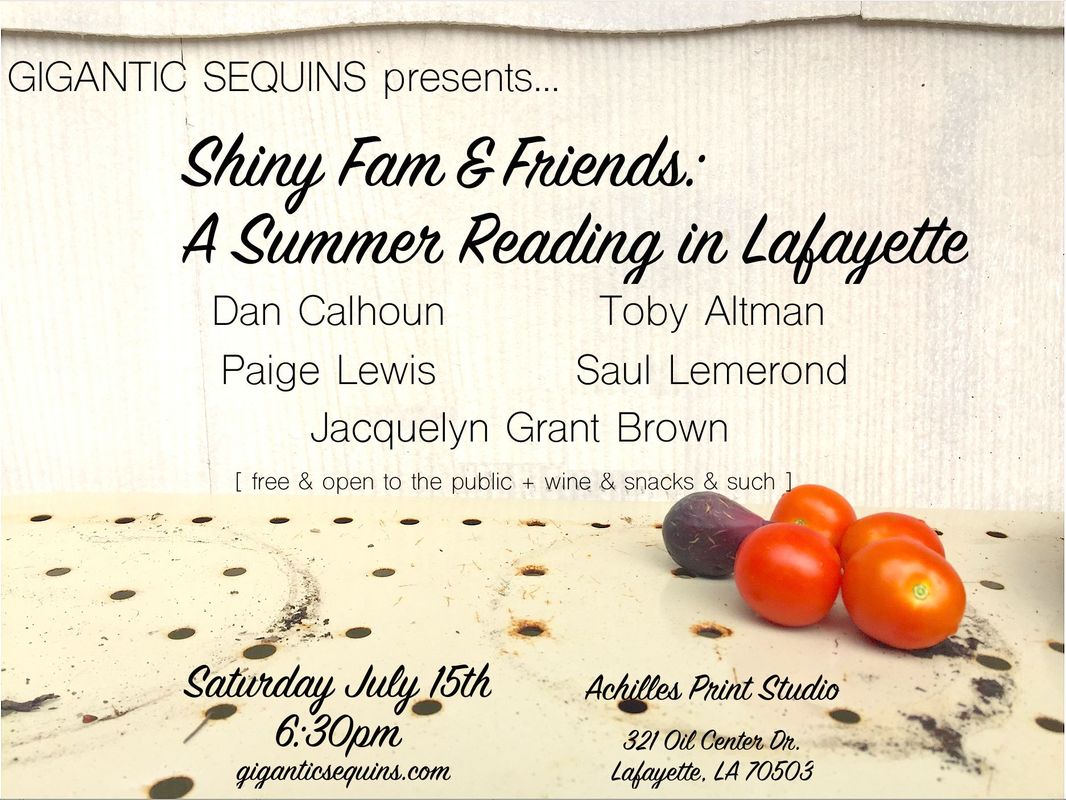 HAPPY SUMMER! Please join host Kimberly Ann Southwick for a reading from the following super awesome wonderfuls at Achilles Print Studio on JULY 15TH at 6:30pm. There will be snacks & wine for munching & sipping AND THE READINGS WILL BE REALLY GREAT.

FREE AND OPEN TO THE PUBLIC. BRING A FRIEND.

READERS...
Jacquelyn Grant Brown is a bookish, wanna-be free spirit, poet and art lover. She is a native of Baton Rouge where facilitates and hosts a monthly literary and performing art series, 7 Minute Sundays. Jacquelyn is extremely fond of travelling and also dabbles in jewelry-making and plant-based cooking in her spare time. Consequently, you’ll likely find her in her car, at the craft table, or in the kitchen. She has a couple of children, a couple of degrees and a couple of tattoos. Her favorite number might be two. Some of her work can be found in African American Review, Rat's Ass Review and others.

Originally from Green Bay, Wisconsin, Saul Lemerond is a third year PhD student at the University of Louisiana-Lafayette. His book Kayfabe and Other Stories was published by One Wet Shoe Press in 2013. His poetry, non-fiction, and short stories have also been published in Gigantic Sequins, Dunesteef, Drabblecast, Notes Magazine, and elsewhere. He was a finalist for the Conium Review Innovative Short Fiction Contest and the Gigantic Sequins Flash Fiction Contest.

Paige Lewis is the author of the chapbook Reasons to Wake You (forthcoming, Tupelo Press). Their poems have appeared or are forthcoming in American Poetry Review, Ploughshares, The Georgia Review, Colorado Review, and elsewhere.

Dan Calhoun grew up in Florida, transplanted to Kansas (where he earned his MFA from Wichita State), and is now living it up in Louisiana. He’s currently a PhD candidate at the University of Louisiana-Lafayette, where he also teaches English though he still manages to watch a few hours of reality television a week.

Toby Altman is the author of Arcadia, Indiana (Plays Inverse, 2017) and five chapbooks, including recently Security Theater (Present Tense Pamphlets, 2016). His poems can be found in Crazyhorse, Jubilat, Lana Turner, and other journals and anthologies.

NOTE! Dan & Toby will be selling copies of their books, so bring some cash money so that you can pick one up. That way, when they will famous lit prizes, you can be all like I KNEW THEM WHEN... & prove it w/ the book you bought at this lovely event...